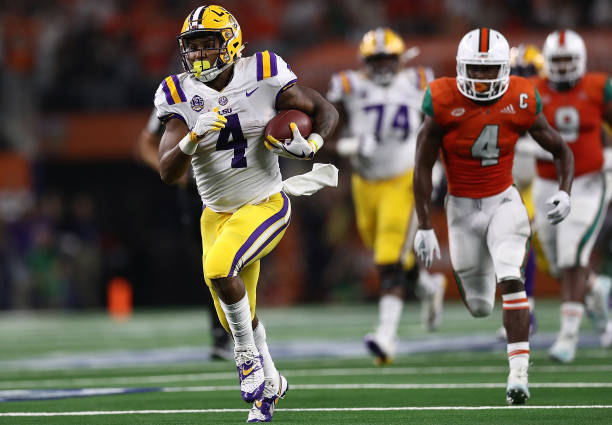 The LSU Tigers roared onto the national spotlight in Sunday Night’s 33-17 win over the 8th ranked Miami (Fl) Hurricanes. For a team that lost its top six skill position players from last year, the LSU offense clicked without missing a beat. Ohio State transfer Joe Burrow was exactly the quarterback the Tigers needed and the Hurricanes defense had no answer for him.

Miami had high hopes coming into this season. Last year, a 10-0 start was nullified by three consecutive losses to Pittsburgh, Clemson and Wisconsin. Miami looked to rebound with a team that was simply very young and inexperienced last season.

Why did this LSU offense play so well as a cohesive unit on this huge stage?

Last season, head coach Ed Orgeron entered his first full season as the lead face of the Tigers program. He wanted the best offensive mind he could bring to LSU. This search led to the hiring of Matt Canada.

Canada runs a pro style offense where he makes a lot of pre-snap motions and resets. He wants his quarterback to learn how to read what the defense is doing by using all of the pre-snap motions to expose their coverage. If the coverage is man, the corners will follow receivers across the formation. If the coverage is zone, they will bring a safety down closer to the line.

The offense frustrated Orgeron because of all the motions and confusion that it caused on his players. Many times, this frustration was vocalized. One game about half way through the season, Orgeron even told Canada to not use so many motions. LSU lost that game, and Orgeron backed off.

It wasn’t a match made to work. Canada left at the end of the season to go to Maryland, where he is now the interim head coach following the suspension of DJ Durkin. Orgeron turned to a familiar face to take over the offense.

After Les Miles had been fired during the 2016 season, Orgeron had made tight ends coach Steve Ensminger his offensive coordinator. The numbers immediately skyrocketed for the struggling offense, and the team went 6-2 with close losses to Alabama and Florida. When Orgeron didn’t keep him as the offensive coordinator, he wasn’t upset. He understood Orgeron’s position and was more then happy coaching tight ends at his alma mater. Orgeron turned to him again to take over the offense.

LSU brought the most balanced offensive attack we have seen from them in quite some time. They ran for 156 yards Sunday night alongside Burrow’s 140 passing yards. Nick Brossette ran for 125 yards and 2 touchdowns, including a 50 yard burst that started the scoring wave for the Tigers.

Nick Brossette takes it 50 yards to give the Tigers a 10-3 lead. pic.twitter.com/CxXa3X9Ys2

Joe Burrow was on point for most of the night with his throws. He ended 11 of 24 on his pass attempts, but dealt with a few drops and threw the ball away on numerous occasions. Because of his threat to attack the secondary with a good throw, the Miami defense had to back out of the stiff run defense they were playing and pull people out of the box. That’s when the LSU offense really started moving.

LSU dominated this ball game from pretty much any and every aspect. They played more disciplined, created turnovers, kept the ball safe, and controlled the game with time of possession. However, one of the most troubling stats on this board is that LSU’s offense went 3-16 on third downs.

Every drive that LSU converted a 3rd down, they scored a touchdown. That’s how lethal this offense is. However, they failed to convert on thirteen first downs. That’s a lot of opportunities left on the field. One of those, LSU elected to go for it on a 4th and short and converted. Four others ended in field goal tries.

As Burrow becomes more comfortable with the offense and his receivers, this offense is going to put up bigger numbers. LSU is really looking like they are back to compete and Coach O is the guy they need. Here come the Tigers, people.