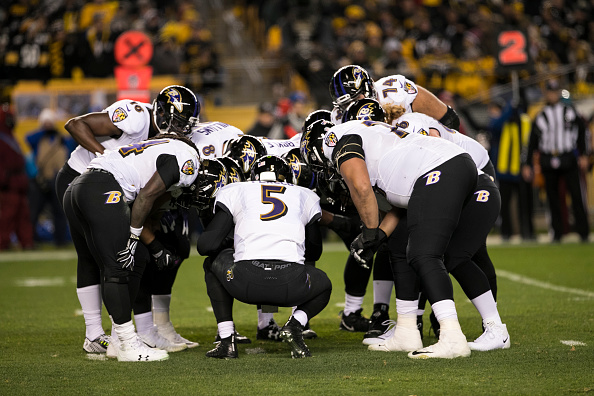 The Baltimore Ravens playoff hopes slipped out of their hands in 2017 but thanks to some offseason revitalization, should be back in 2018.

The Ravens had another up and down season in 2017 missing the postseason for the third year in a row. Baltimore’s season essentially ended on a heartbreaking 4th & 12 reception that saw Tyler Boyd put the Cincinnati Bengals into the lead with under a minute to go in the last game of the Ravens season. The blown play was the second time in four games the Ravens had allowed the go-ahead score in the final minute of the game and effectively knocked Baltimore out of the AFC playoff race.

Now looking ahead to 2018, the Ravens are trying to return to the playoffs after three forgettable seasons. The team has made a ton of switch-ups from both the draft and free agency in the last two years and could be one of the NFL’s better teams if everything goes according to a plan. They face a relatively tough schedule but already look a lot better on paper than the team that finished 9-7 in 2017.

Here is why the Baltimore Ravens will return to the playoffs in 2018.

The biggest deficiency for the Ravens in 2017 was undoubtedly the receiving corps. It wasn’t just one or two receivers either, there were weaknesses everywhere. From Ben Watson – a 37-year-old tight end – leading the team with only 62 receptions, to having no receiver catching more than three touchdowns, to the multitude of critical drops by the rest of the wideouts, the Ravens pass catchers were pretty bad. The poor season did, however, send GM Ozzie Newsome on a mission to revitalize Joe Flacco‘s weapons.

The Ravens revamped the entire receiving core through both free agency and the draft. Baltimore signed three new wide receivers and drafted two tight ends in the first three rounds. There is also very little talent in house that could succeed these acquisitions. New signee Michael Crabtree is almost certain to become the team’s new number-one receiver and should give Flacco a target that can go up and win a 50-50 ball as well as grab some TDs in the red zone. Willie Snead has the potential to become a great slot receiver and will give Flacco a pair of sure hands over the middle. Both Mark Andrews and Hayden Hurst will be given a ton of opportunities to become great receiving options after being two of the best tight ends in the NCAA last season.

The Ravens did win nine games in 2017, even without a group of serviceable receivers but that isn’t a good formula if you want to make a Super Bowl run. As good as the defence is, it cannot win every game by itself.

Going into 2017, the Ravens biggest question mark was the back of Flacco. Flacco sustained the injury before the start of training camp and was forced to miss the entire preseason. Luckily, the Ravens starting quarterback would be able to return for week one of NFL season. From there, Flacco had problems getting in a rhythm with his receivers and sank the Ravens offence to near the bottom of the league. He would pick it up at the end of the season but the poor games he played early in the season cost the Ravens their playoff chance.

This year there are no more excuses for Flacco. His receiving core has been significantly upgraded and he will have all of training camp to get on the same page with his receivers. He is also getting both of his usual starting guards back after Marshal Yanda and Alex Lewis missed all but two games combined in 2017. With a much improved offensive line and a much improved receiving corps, Flacco could actually be poised to have one of his best seasons to date. Alex Collins was a pleasant surprise in Baltimore last year and if he replicates his success from last year, should take some of the pressure off of Flacco. If Flacco falters, he knows Lamar Jackson is waiting in the wings to replace him.

The Ravens offence looks to be a bit of a mish-mash in 2018 but it can only get better from the way they played last season. Flacco will be given the reigns to begin the year but there is no guarantee he finishes as the starter. The offence might not be great, but Flacco should be able to at least help them finish as a middle of the pack unit.

Baltimore’s biggest strength in 2017 was without question their stout defence. Despite giving up a couple more yards than they would like (12th in the league: 325.1 YPG), they would finish the year with the 6th best scoring defence only surrendering 18.9 points per game. This included three shutouts with a very poor offence. They also finished with a league-leading 22 interceptions, returning 5 turnovers for touchdowns.

So how could they get better despite not selecting a defensive player until the 4th round of the draft? Simple. They are (as of now) healthy.

Every team in the NFL loses players down the stretch but the Ravens typically have worse luck than others. Defensive cornerstones DT Brandon Williams and CB Jimmy Smith both missed significant time and 2016 Ravens rookie of the year CB Tavon Young was forced to miss the entirety of 2017. Baltimore’s best defensive player C.J. Mosley was also playing on a hurt ankle after week 11 and was noticeably hampered by the injury. With the majority of the defence remaining unchanged but healthy, the Ravens looks set to pick up right where they left off in 2017.

The big question mark is up front. Baltimore failed to have a consistent pass rush at the end on the season and with so many picks put into the front-seven in 2017, the Ravens need to hope one of the sophomores steps up. If the pass rush can find its legs, the combination between itself and the ball-hawking secondary could form the best defence in the NFL.

John Harbaugh is on the Hot Seat

After making the playoffs and winning a game in six of his first seven season’s as an NFL head coach, Baltimore’s all-time winningest coach has missed the playoffs three years in a row. Harbaugh’s record since winning the Super Bowl stands at a solid 40-40 but playing .500 ball won’t be enough to keep him around for much longer. Couple this with Newsome’s departure at the conclusion of this year and the Ravens could be cleaning house very soon.

However, even if Newsome is on his way out, it doesn’t necessarily mean Harbaugh has to be. With all the talent the Ravens have injected the roster with through the last two drafts, the 11th year coach should be more motivated than ever. Being a game away from the playoffs in back-to-back years will do that for a coach. He will also have three coordinators to work with that have been around him for a long time. The return of offensive coordinator Marty Mornhinweg may not seem like much considering how poor the Ravens offence was last season but if he plays out the season in Baltimore, he will become the longest tenured OC since Cam Cameron. The Ravens have had four different OCs since his firing in 2012.

The name of the game this year will be familiarity for Harbaugh. His squad is more than talented enough to get into the AFC playoffs and has a nice mix of returning players and new faces. If Harbaugh can avoid another slow start and instead, have the Ravens off and running to begin the year, he could save his own job and get Baltimore back into the playoffs sooner rather than later in the season.