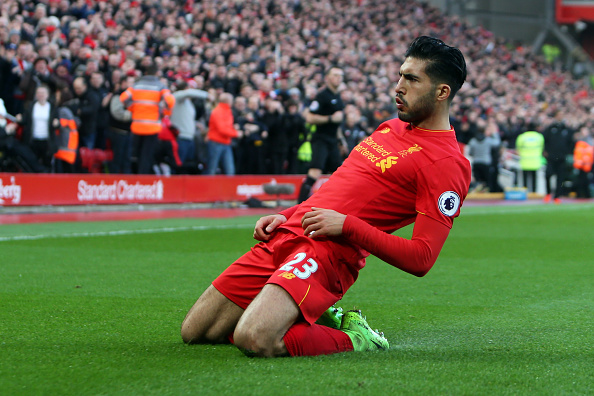 Liverpool midfielder Emre Can has struggled for game time and form this season. With just over a year left of his current contract left to run, he is playing for his future.

According to the Liverpool Echo, Can is believed to be looking for a pay rise that would see his current £35,000 per week deal double to £70,000 per week.

Liverpool Midfielder Has Great Chance To Prove His Worth

Many supporters don’t think he deserves a pay raise for his efforts this season. But in fairness to the German international, he is still only 23 and has his best years are ahead of him. With plenty of time to improve his game, he has all the attributes required to make him a top class midfielder. He is big and strong, has good energy, the ability to dribble and is capable of a defence-splitting pass.

However, this season Can has looked slow and indecisive in possession and hasn’t moved the ball as quick as the likes of Jordan Henderson, Gini Wijnaldum, Coutinho or Adam Lallana.

But his versatility to play a variety of roles in Jurgen Klopp’s team is very important and his value shouldn’t be underestimated. Can starred in defence many times for former manager Brendan Rodgers and last season, in my opinion, he turned into one of Liverpool’s most important players.

Can’s form last season raised expectations that he would kick on further this season, but his struggles with injuries and the signing of Gini Wijnaldum have made it difficult for the German to establish a run of games in the team, hindering his form.

Liverpool captain Jordan Henderson has become a bit injury prone in the last couple of seasons, and it is important to have quality players in reserve to replace first choice players, and Can fits the bill.

Can showed what he is capable of in the last couple of games. In the 3-1 win over Arsenal, he made numerous tackles and wasn’t afraid to leave his foot in despite conceding some free-kicks.

In the 2-1 win over Burnley, Can was used as a third centre back at times to help nullify the threat of Burnley’s long ball tactics to Ashley Barnes. Once again the German wasn’t frightened to throw his weight around. He looked to enjoy the physical challenge that Burnley presented. Can capped off a very good performance with the winning goal from long range.

Should Can Be Offered A Wage Rise?

If everyone is fit, then I think Can struggles for a game, but his versatility, physical presence and work rate makes him a valuable player for Klopp’s squad.

Many pundits and fans think he doesn’t deserve his wages doubled. But if he is to receive £70,000 in a new contract, then it doesn’t seem astronomical compared to the likes of Lallana and Coutinho’s  new contracts, and Daniel Sturridge’s contract that see very little in return from the player.

Hopefully Can will agree to a new contract because it would be a big mistake to let him go at this stage of his career.