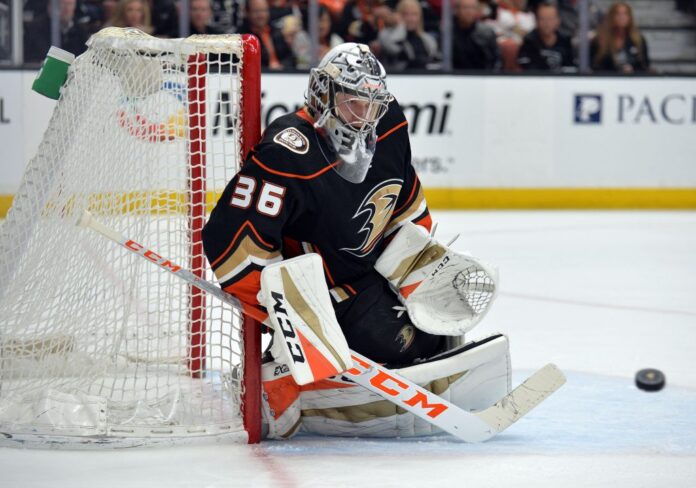 Today, I look the top 3 overrated goalies in the NHL. If you are a goaltender in this league, an early-career reputation can be hard to shake. Sometimes this works against you, like when Craig Anderson was believed to be a problem in the dressing room. Alternatively, some goalies cement themselves as studs early on and this sticks in people’s minds even when they struggle later. Here is a list of some goalies who I think fit that description.

The Top 3 Overrated Goalies in the NHL

Jordan Binnington makes the third spot on this list of overrated goalies in the NHL. He burst into the league in the 2018-19 season, going 24-5-1 with a 1.89 GAA and .927 SV% during the regular season and leading the St. Louis Blues to their first-ever Stanley Cup win. Binnington was a finalist for the Calder Trophy that year as well. His success that first season caused many people to peg him as an elite goaltender and a future Vezina favourite.

However, over the last three seasons, the Blues have only won 51.6% of the games that Binnington has started, this despite being a playoff team each of those years. During that span, he has put up a very mediocre 2.75 GAA and .908 SV%. Even worse, his goals saved above expected has been a disappointing -7.8. He has been slightly better in the playoffs than in the regular season (-1.1 GSAx), but overall, Binnington has not been able to live up to the reputation that he earned during that first season, making him one of the most overrated goalies in the NHL.

The Pittsburgh Penguins had a tough choice to make after the 2019-2020 season. They had two starting goalies: Matt Murray and Tristan Jarry. Murray was the goalie who helped them win back-to-back Stanley Cups in 2016 and 2017, but his numbers had been declining for a few years. Jarry on the other hand, had just had a season where he went 20-12-1 with a 2.43 GAA and a .921 SV%. The Penguins decided to go with Jarry, and they traded Murray to the Ottawa Senators. This was definitely the right decision for the team. Murray’s numbers have continued to decline, and Jarry’s have remained fairly stable.

Jarry has won 59 of his 94 starts over the past two seasons with a 2.55 GAA and a .915 SV%. However, if you look at some of his underlying numbers, it appears that Jarry’s stats have been padded by the fact that he plays for the Penguins. His goals saved above expected in the regular season has been +1 (which is fine, but a little underwhelming), but it is in the playoffs where he has really struggled. Over the past two playoffs, his GSAx has been -10.1, one of the worst in the entire NHL over that span. Similar to Chris Osgood, Jarry will probably be looked back on as an average goalie who played for a stellar team.

John Gibson was one of the most touted goaltending prospects to ever come out of the US National Team Development Program. When he was 19, he lead the US to a gold medal at the 2013 World Junior Hockey Championships (where he was named the tournament’s best goaltender) and then also started for Team USA as they won bronze medal at the World Championships a few months later. He continued this success for the Anaheim Ducks where he posted a 2.42 GAA and a .921 SV% in his first five seasons.

However, as the team has started to decline, so has Gibson. He has only won 33.1% of the games he has started over the last three seasons, which ranks him last out of all goalies who have won at least 50 games during that span. He has also been near the bottom of the league in goals against average and save percentage. But this isn’t just a case of a goalie who is struggling on a bad team. His goals saved above expected over the last three seasons has been an atrocious -39.7. The reputation that Gibson earned early in his career has carried him for a while, but now he is firmly the most overrated goalie in the NHL.

as i said, i do NOT want john gibson. while he's put up good numbers before, he has clearly fallen off.
here shows gibson's shot against heatmap, along with the shotmap of how anahiem plays when gibson is on the ice. pic.twitter.com/LGjGn4BdYv