The Tampa Bay Buccaneers are one of the hottest teams in the league. After a relatively slow start to the year, Tom Brady has this offense looking like one of the best in the league, while the defense thrives with a ferocious front seven and a great young secondary. However, Brady and company should know better than to overlook the New York Giants. The Buccaneers enter Monday Night Football as 12.5-point favorites, but can you trust that spread?

If you find yourself becoming overly emotional about whoever wins on Monday Night Football you should visit sites like comeon.com to see which side of the team you should jump this Monday.

Of course, Brady has his fair share of heartbreak against the New York Giants. Back in Super Bowl XLII, Eli Manning and the New York Giants ruined Brady’s dream of perfection with a 17-14 victory. This, of course, ruined New England’s otherwise perfect season and highlight a 10-year title drought for Brady and the Patriots.

Of course, that wasn’t Brady’s only experience on the wrong end of a super bowl loss. In Super Bowl XLVI, Manning and the Giants once again took a title from Brady, winning 21-17 thanks to another last-second game-winning drive. While this one wasn’t quite as hard to stomach for Brady and Patriots fans, it’s still a tough loss to remember. The wound is made worse considering that the Patriots lost to the Giants in the regular season and, had they won, New York wouldn’t have been in the playoffs to begin with.

Since then, however, Brady has had success against Big Blue. In 2015, Brady and the Patriots beat the Giants 27-26 on a last-second field goal. However, the Patriots lost Julian Edelman to a broken foot in this game, effectively ending their super bowl aspirations for that season. In 2019, New England comfortably won by a final score of 35-14. This, of course, was the first time Brady faced the Giants in the post-Eli Manning Era.

Of course, a lot has changed between Brady and the Giants. For one, Brady is on a brand new team. After spending 20 years in New England, Brady is now a Florida man. The six-time super bowl champion is playing like his old self and finds himself in the thick of the MVP race. He’s surrounded by a fantastic supporting cast, although Chris Godwin is expected to miss this week. Still, he’ll have Mike Evans, Scotty Miller, and Rob Gronkowski, which should be more than enough to tear apart this secondary.

The New York Giants, meanwhile, look like one of the worst teams in football. Daniel Jones is having a rough season, as New York’s offensive line is constantly leaving him out to dry. Darius Slayton has shown some life, but Golden Tate, Sterling Shepard, and Evan Engram have not played up to their potential. Tampa Bay’s defense should have no trouble slowing down this passing attack, and the Buccaneers should cover this massive spread. Even though he’s had his struggles against this team in the past, take Brady and the Buccaneers to win and cover.

Why the 2019 Pittsburgh Steelers Were the Best Team for 2020 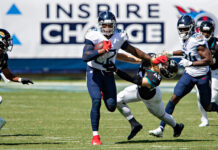