With the details of the NHL’s return to play announced, it’s time to look ahead to the return of hockey. With the top four seeds in each conference receiving byes to round two, seeds 5-12 will play for a spot. A variety of interesting series in both conferences sees the Calgary Flames battle the Winnipeg Jets. Along with that, the Carolina Hurricanes face off against the New York Rangers. However, no series provides more interest than the Toronto Maple Leafs taking on John Tortorella’s Columbus Blue Jackets. After a series of disappointing playoff losses, the stage is set for the Leafs to establish themselves among the elite. Standing in their way is a Columbus team that, while not loaded with top tier talent, works harder than any team in the league and relies on strong defense and positional play to win hockey games. A tough first-round matchup that has five games written all over it, here is my Toronto vs Columbus playoff preview.

While Columbus has a few pieces up front, Auston Matthews and company give the Leafs a decided advantage. While a fully healthy Jackets team features some offensive firepower with names like Pierre Luc Dubois, Nick Foligno, and Boone Jenner leading the way. Toronto features more talent upfront with Matthews, John Tavares, and Mitch Marner, all finishing above the 60 point mark. A top team in scoring, the Leafs had 237 goals in 70 games this season, led by 47 from Matthews. In a completely different look, the Jackets finished 21st in goals for with 180, struggling mightily in that department. While ice in the playoffs is hard to come by and goals become a premium. If the Leafs begin to click on offense, it could be an early exit for Columbus.

A staple for a John Tortorella coached team; the Blue Jackets finished top five in the league in goals-against with just over 2.6 allowed per game. Led by stud defenseman Seth Jones and young up and comer Zack Werenski, Columbus features one of the elite top pairs in hockey. Likewise, with the return of a healthy Morgan Rielly to go along with the newly acquired Tyson Barrie and longtime veteran Jake Muzzin, the top end of the Maple Leafs defense core features elite talent.

However, the leaf defense struggled mightily at times over the regular season, averaging over three goals against per game, good for sixth-worst in the NHL. What the series will come down too is the depth that each team poses on defense, and with a lot of question marks on the bottom half of the leaf’s defense core, I’ll give the advantage in this Toronto vs Columbus preview to the Blue Jackets.

Perhaps the most significant question mark of the entire series, goaltending will go a long way in determining who moves on. All eyes will be on goaltender Frederik Anderson in Toronto as the last couple years in the playoffs; he has looked shaky at times, causing trouble for a young leaf team. 2019 was an up and down year for Anderson as he posted career-low numbers with a 29-13 record, a .909 save percentage, and a 2.85 GAA. Not given any help due to shaky play defensively in front of him the entire season, Toronto will need Anderson to be at his best if they have any chance of moving on into the next round.

In Columbus, the Jackets were greeted to one of the season’s stories in the NHL in young goaltender Elvis Merzlikins, who burst onto the scene for the team this year, recording a 31-13 record, a .923 save percentage, and a 2.35 GAA. Generating some buzz for the Calder Trophy, Merzlikin’s play is what allowed the at times offensively challenged Blue Jackets to remain on pace for the playoffs. Heading into his first playoff series, I believe he will show strongly and prove he is the future netminder in Columbus. However, I’m sticking with the veteran in Anderson to give the Leafs an advantage in goal.

The biggest mismatch of the entire series, coaching, could ultimately allow the underdog Blue Jackets to upset the Maple Leafs. Led by longtime head coach and a favorite for the Jack Adams trophy in John Tortorella, Columbus is one of the hardest working and well-coached teams in the entire league. Clogging up the middle of the ice and funneling everything to the outside, the Jackets rarely give up high-risk chances. Along with this, they also play system hockey better than anyone in the league.

On the other side, rookie head coach Sheldon Keefe makes his playoff debut for the Leafs after taking over midseason for the recently departed Mike Babcock. While Keefe had a strong start in his tenure in Toronto, allowing the Leafs to play with more freedom offensively. However, in the playoffs, goals become harder to come by as teams check harder and tighten up defensively. This means the young coach could be in trouble with one of the best in the business on the other side.

One of the most exciting series of the play-in round, this one has five games written all over it. While the hard-working, defensive-minded Blue Jackets could cause problems for the Leafs, I still think the Leafs win the series. 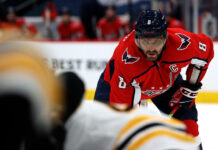 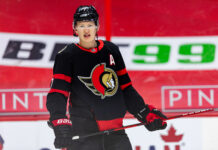