With the recent pandemic shaking the world and bringing it to its knees, sports has been one of the hardest-hit industry. Currently, all world sports, including the Olympics, has been postponed to a later date that the world is still uncertain of. But that does not mean that all is dead, athletes all over the world are still very much active on forums in discussing their respective games. And in this piece, we are shedding the light of focus on the Calgary Flames.

So, what has the team been up to? Is the game dead, or what? Can we still bet on the games returning or not? Well, read on to find out what they have been up to.

Calgary Flames: The Latest Even With The Coronavirus Pause

Brad Treliving, the General Manager of the team, has taken this pause as a chance to do a few in-depth evaluations in matters concerning the organization. Before, he had very little time to reflect on the first 70 games of the regular season. But now, he can do so.

He also had no possibility or revisiting coach Geoff Ward’s performance, who was Bill Peters replacement. Bill Peters resigned in late November last year after admitting that he used racial designations in the past. In a statement, he said, “that’s on the list.” the list referring to the things he is to do during this unprecedented pause. 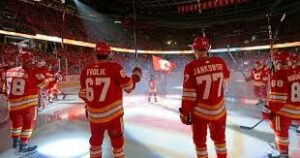 You would think that even with the COVID-19 pandemic, all doors of the NFL would close, but you are mistaken. The signings are continuing unaffected.

The Calgary Flames signed free-agent defensemen from Minnesota State University Mankato and Nort Dakota. The two players are Connar Mackey and Colton Poolman, respectively, each getting a one-year contract as of March 20th.

After the signing, he stated that the two contracts do not mean that their UFA’s are gone. But instead, a tremendous additional as you can never have too many defensemen in the team. And considering they are hard to come across, why not!

21-year old Juusa Valimaki was also contracted in for the next season after missing the entire previous season due to knee surgery. All signings are youngsters expected to give the team an extra edge. At their young, agile age, with excellent skills and experience in the game, Treliving is confident in his signings.

Communication among the team members

Trevliving also makes an effort to keep his team members in the loop in terms of communication. The unrest that the pandemic has brought to the world has caused anxiety for the team members. With a free-flowing communication channel, assurance, and confidence, they believe everything will fall back into place in no time.

He states that he tries to keep himself and his team active both physically and mentally. For the sake of mental health, they must stay positive and productive.

On that same vein, other team members are taking to social media posting of their day-to-day activities. They post pictures, podcasts, and videos with messages to their fans, encouraging social distancing and other measures as a way to curb COVID-19. In addition to that, live video chats are now a regular thing, where they talk about critical aspects of the game and so much more.

Reviewing of past games

The team members plus Treliving has put in effort into the reviewing of previous games. Treliving articulates of having set some time apart each afternoon to watch videos of past matches, the performance of current players including possible free agents, and of coarse prospects. This recess is to give him more ‘study time’ that can be very crucial in the near future.

Most of these players do not get to spend a lot of time with their family members, but with the sudden pause to the games, they have to. This shift works significantly to the advantage such that they get to learn more about each other. For instance, Treliving said that everything is going great, he jokingly said that he and his family enact social distancing, that if two or three assemble, weird looks are passed around. He said he had lost 3-1 votes in the house.

A time to reflect and exercise leadership

The Flames, both at home and in the office are also taking this halt as a time to focus on more significant issues. The pandemic caught everyone off guard, and this is when leadership is best seen. Treliving urged that in a position of leadership, one must provide kindness and set an excellent example of caring for everybody. The spreading of hope, being disciplined to follow the rules, and everybody doing their part, will bear fruits eventually. Also, being sensitive enough to realize that some people are suffering more than others.

With all that is happening to the world, the sporting industry has evolved into something worthwhile. Although there is a great reduction in physical activity, all hope is not lost. And Calgary Flames are at the frontline giving all other teams hope of getting back in business. It is just a matter of time.