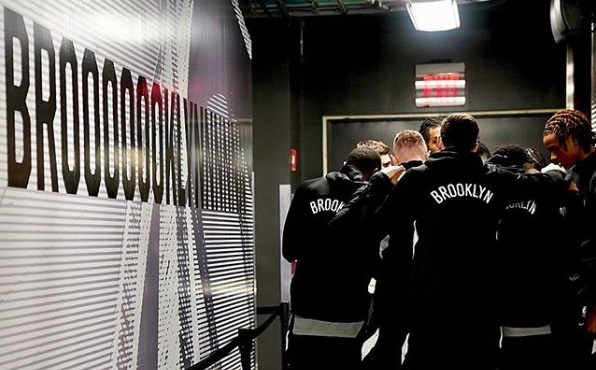 The NBA season is just a month old, meaning it is too early to sound the alarms for any team — the New York Knicks included. But their interstate rivals, the Brooklyn Nets, ought to be on edge at the moment. There’s a real cause for concern in Brooklyn, a mere four months after the Nets formed their own Big Three. They signed All-Stars Kevin Durant, Kyrie Irving, and DeAndre Jordan on multiyear contracts in arguably the biggest free-agent coup in NBA history.

Granted, Durant is still recovering from his torn Achilles and is likely to miss most, if not all, of this season. Still, the Nets are expected to improve on last year’s 42-40 record, with Irving and Jordan holding the fort, alongside holdovers Caris LeVert, Spencer Dinwiddie, Joe Harris, and Jarrett Allen. But a month in, the Nets are a sub-.500 team, and are in the bottom half of the Eastern Conference. Again, it’s early but there is a reason to worry.

Should the Brooklyn Nets Be Worried?

While the Nets’ defense last year was just about average, their defense this season has been downright terrible. They’ve surrendered an average of 118.8 points per game, (4th worst in the entire NBA), in contrast to last season’s 112.3 points per game (18th overall). Even worse, that defense seems to turn sieve-like in the second half, when the Nets have frequently blown big leads (as in their early-season losses to the Utah Jazz and Denver Nuggets, where they blew 16 and 15 point leads, respectively). Nearly everyone has struggled defensively for the Nets this season, including Irving (a so-so defender to begin with) and even Harris (one of the team’s better defenders). But a bigger culprit might be Jordan, one of the Nets’ high profile additions.

In Zach Lowe’s ‘10 Things I Like and Don’t Like’ column for ESPN he talks about a possible positional fit problem for Jordan in Brooklyn. He highlights how the Nets have been outscored by their opponents on average by 13.4 points per 100 possessions when Jordan is on the floor. The problem with the big man, Lowe explains, is that he “just doesn’t do anything on defense beyond being large and near the basket.” That has been Jordan’s calling card for years. But it has been rendered anachronistic by today’s pace-and-space style. Coincidentally the Nets have a big man — Jarrett Allen — perfect for that style of play. With him on the floor instead of Jordan, the Nets outscore their opponents by 12. Yet he has to share minutes with the 31-year-old Texan.

Another concern for Brooklyn is Kyrie Irving, who has been dogged by questions about his perceived lack of leadership and sometimes trigger happy ways. Irving’s iso-heavy play seems to have supplanted the Nets’ beautiful motion offense of last season, as 8.9% of the team’s possessions end up in isolation (4th most in the league). Irving is hoisting 22 shots a game and has attempted 27 or more shots four times already this season. Part of this is due to Irving having to shoulder a bigger load offensively, with Levert still out due to a thumb injury and Durant still far from a return. More worrisome, perhaps, is the Nets losing Irving if things don’t go well soon. Bleacher Report states that Irving often lapses into funks, where he shutters everyone off. The team has jumped to Irving’s defense, presumably in an effort to appease him, but there’s a palpable unease here, and the Nets will be in trouble if things boil over.

However, all is not lost for the Nets, as the season is just a month old. Not to mention they still have Kevin Durant to return. The two-time Finals MVP is one of the game’s five best players and an icon of the sport. This has been shown in his commitment to the Nets. Ladbrokes details how Durant is one of the top earners in all of sports, raking in over $55 million (C$73 million) annually. Yet he willingly took a pay cut to join this Nets team, in part because he was a fan of their culture, and in part, because he wanted to play with Irving and Jordan. When he returns he will try to right the ship immediately, as he’ll ease the load off the Nets’ other two stars. But in the meantime, the Nets will need KD to be a leader, and maybe rein in Irving and light a fire under Jordan.

On the bright side for the Nets, these early-season hiccups can still be rectified. They have a brilliant coach in Kenny Atkinson who’ll make all the necessary adjustments, as well as a talented core looking to build some chemistry. Besides they’ll still have Durant and Irving moving forward, and that’s a good enough start for any team looking to build a championship contender.