The Cleveland Browns have signed running back Kareem Hunt. Hunt played for the Kansas City Chiefs and was considered one of the NFL’s top running backs prior to his release for a domestic abuse situation. Hunt now joins the Browns, a franchise that had a decent group of running backs before signing Hunt, as they continue to rebuild and become a competitor in the NFL once again.

Cleveland has added Hunt to a backfield that includes standout rookie running back Nick Chubb and veteran receiving back Duke Johnson. Hunt finished last season with 1202 yards from scrimmage and 14 total touchdowns in just 11 games. He also had 1,782 yards from scrimmage with 11 touchdowns in his rookie season for the Chiefs. Hunt’s talent is undeniable and is not the reason people are concerned about the signing for Cleveland. If Hunt can get through his situation and pending suspension, the Browns have a steal for the 2019-20 season.

If Hunt has stays focused and believes he will return to the NFL, then Cleveland has struck a gold mine. Hunt is very young and can dominate defenses for Cleveland in 2019. Hunt will have possibly the best complimentary backs in the league in Chubb and Johnson. It will be interesting to see who Cleveland starts in 2019. Hunt is one of the best young backs in the NFL, but Nick Chubb excelled in his rookie season. He deserves to be a starter in the league. The NFL is quickly adopting a trend of having multiple starting caliber running backs, and the signing of Hunt makes Cleveland the latest team to adapt to this trend.

Many people will question the Brown’s decision to sign Hunt following his sensitive situation. Browns GM John Dorsey says that he has a relationship with Hunt that allowed him to decide he deserves a second chance. Dorsey drafted Hunt when he was general manager for the Chiefs in 2016. He saw the talent in Hunt then and thinks he can make it work in Cleveland. John Dorsey has done wonders for Cleveland and helped the Chiefs become the powerhouse they are today. If anyone is going to be trusted with making a move like signing Hunt, it’s Dorsey. Hunt is signed to a 1-year contract that will make him a restricted free agent in 2020, which limits the risk for Cleveland anyways.

Cleveland has made great improvements to their roster since going 0-16. The signing of Kareem Hunt undoubtedly adds even more talent to their roster. Hunt will pair with Baker Mayfield in the Browns’ backfield to create a young duo Cleveland can get behind as they rise back to competitiveness. Their AFC North opponents are in a good spot for Cleveland to sneak in and dominate. The Steelers have internal issues with multiple superstars, Baltimore is transitioning into the Lamar Jackson era and presents Cleveland their biggest threat, and Cincinnati has multiple issues on their roster they need to figure out. Plus, Cincinnati is entering the Zac Taylor era, which might take a year to get off the ground. Cleveland has put themselves in a prime spot to take over this division. 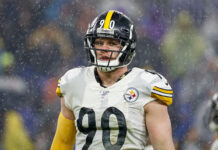