With only a few weeks left in the regular season, the playoff picture has started to take shape. Some teams such as the Los Angeles Rams and New Orleans Saints have already clinched their divisions. Others such as the Baltimore Ravens and Seattle Seahawks are fighting for a wild card berth. This is the most exciting time of the season, as every game matters even more from now on. Only five teams have been eliminated from playoff contention so far, so anyone can make a push for the postseason. Here are my predictions for the standings and playoffs ending with the AFC.

Why: The Texans have been unstoppable the second half of the season, winning nine of their last ten games. Deshaun Watson has thrown for nearly 3,300 yards and 22 touchdowns so far with nine interceptions and a QB rating of 100.9. He has also ran for 410 yards and has not lost any explosiveness he had at Clemson. Lamar Miller has 909 rushing yards and four scores including a 97-yard touchdown vs Tennessee. DeAndre Hopkins has continued to produce with over 1,100 yards and nine scores. Demaryius Thomas has been a great addition for the Texans to take attention away from Hopkins. J.J. Watt and Jadaveon Clowney need no explanation for their significance, and because of how many pieces they have Houston wins this game. Miami does not have the weapons to contend, however Xavien Howard their CB has become a star and is highly underrated.

Why: Lamar Jackson has shown flashes of stardom, but he’s still a rookie. Assuming he starts in the playoffs the Chargers will game plan to stop him from scrambling. Melvin Ingram and Joey Bosa are dominant, and will give the Ravens OL problems. With a lack of a feature back and an unexperienced QB, the Ravens will not play how they have this season. Melvin Gordon and Phillip Rivers will use their veteran leadership and experience to defeat Baltimore. As long as they stay healthy, the Chargers have a legit shot at making a run for Atlanta.

Why: Tyreek Hill can change a game singlehandedly. From end arounds and screens to deep posts and the return game the number of ways he can beat you is rare. Even with the loss of Kareem Hunt the Chiefs still are nearly unstoppable on offense, and Patrick Mahomes has had an MVP caliber season. It’s hard to come into Arrowhead and win, and with the momentum, Kansas City has had I believe they will go to the AFC Championship.

Why: As long as Belichick has his Patriots hoodie on, I will not pick against them. He’s succeeded without Brady, so even after Brady retires the Pats should still compete. But he won’t retire anytime soon, and with weapons such as Patterson and Gronk the Patriots should dominate the Houston secondary. It takes a special team to win in Foxborough, unfortunately for the Texans, they are not one of them and will lose by double digits.

Why: This will be a great game, both teams are very talented and have the pieces to win the Super Bowl. But if anyone can come up with a game plan to slow down the Chiefs offense it’s Belichick and the Patriots. This will be another game where the Pats start out slow but in the second half come back to win. The Golden State Warriors of the NFL will advance to their third straight Super Bowl.

Until now I put a winner and explained why, but this is the Super Bowl. The Patriots and Saints are very evenly matched, and have talent on offense and defense to compete with each other. In a dual between two of the greatest QBs to ever play, the game will come down to the fourth quarter and which defense can get a stop. Belichick is a defensive mastermind and will come up with a plan to stop Brees, and give Brady the ball with a chance to win. Brady will do what he does best and drive his team down the field for the winning score. After a heartbreaking defeat, last season the New England Patriots get revenge and win Super Bowl 53 with a score of 27-20. Brady wins MVP along with his 6th ring and forever ends any debate on who the greatest of all time is.

These predictions are as of the end of week 14, so the teams who make the playoffs could be very different. I decided to do it now since we have an idea of who can make it and to see how well I can predict the future. I’m bound to get most of this wrong, but I hope you enjoyed and enjoy the rest of the season and the playoffs. 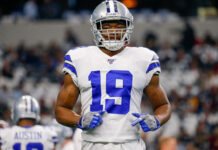