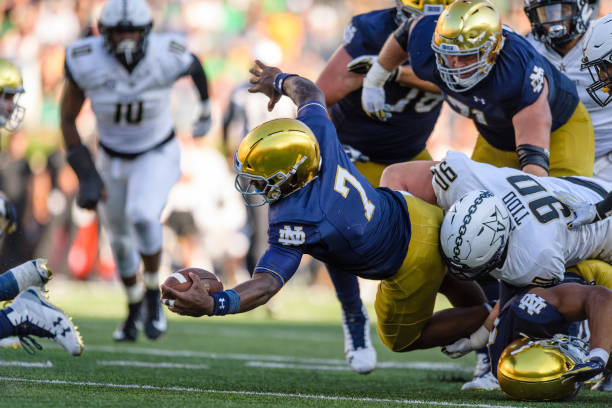 The Notre Dame Fighting Irish have jumped out to an almost unbelievable 3-0 start in the 2018 college football season. With wins over Michigan, Ball State and Vanderbilt by a combined total of 20 points, Notre Dame has had its share of close calls already this season. It’s latest, a 22-17 victory over Vanderbilt, wasn’t the most impressive of victories, as Notre Dame struggled for the third consecutive week to move the football offensively and gave up a lot of yards to their visiting opponent.

Notre Dame entered the season as a little bit of an unknown. The team returned five offensive starters, and just 18 lettermen on offense. Their left tackle and guard were both top ten picks in the NFL Draft. They were ranked twelfth on the AP Preseason Poll.

Their defense has been the key to their success so far, as the defense has held opponents to just 16.7 points per game. However, in the Vanderbilt game on Saturday, September 15th, the Vanderbilt offense left a lot of points on the field, unclaimed on the scoreboard.

Let’s just face the facts. Notre Dame is not among the top 25 college football teams.

In week one, The Michigan Wolverines visited Notre Dame. The Fighting Irish got out to a 14-0 lead with two deep shots down the field from quarterback Brandon Wimbush that both could have been easily defended (or intercepted) by the defensive back had he been paying attention. One of the passes went straight through the defenders arms for a score.

Michigan is a very good defensive team, and they buckled down the second half and almost came back. However, the crucial part of Michigan’s lack of success the past couple of years has been their offense, and it sputtered out again.

If Michigan stops one of those long touchdown passes early, it’s a completely different ball game. Michigan could have taken the game into overtime and very possibly may have won. Notre Dame didn’t play well in the second half, but unfortunately for Michigan, neither did they. Notre Dame pulled out, 24-17.

The next week against Ball State, the same thing happened. Notre Dame busted some big plays early, but struggled late in the game and barely got past Ball State, 24-16.

The struggles against Vanderbilt

Against Vanderbilt, Notre Dame built a 16-0 lead before the Commodores stormed back into the game, scoring a field goal before the half and then scoring a touchdown at the beginning of the 3rd quarter. However, look at the plays that Vanderbilt missed on.

Wild sequence in the 2nd qtr. of Saturday’s Vanderbilt/Notre Dame game as @dtennyson4 gets stripped on the football near the goal line & a scrum for the football ensues in the endzone. #VUvsND #VANDYvsND https://t.co/qxHASJeuWr

In the second quarter, wide receiver Danoven Tennyson caught a pass on the one and was about to set up a score when the ball busted loose and went into the end zone. A Vandy player was in position to recover the fumble in the end zone, but he somehow missed the ball and it popped into the arms of a Notre Dame defender for a touchback.

Vanderbilt missed a field goal right before the half that would have made the ball game 16-6.

Vanderbilt quarterback Kyle Shurmur threw a pass for the end zone in the third quarter that got intercepted. It was a horrible decision and wiped away an opportunity to score.

Then, driving in the 4th quarter with under a minute to go, Vanderbilt, in Notre Dame territory, suffers the bad case of the drops which causes them to loose the game.

Top 25 Teams have to Dominate at some point

In my opinion, to be a top 25 team, you have to dominate at some point. Notre Dame has failed to to do in any capacity. They’ve had two really good opportunities to do so, once against a Ball State team that went 2-10 last year and another time against a Vanderbilt team who is one of the worst three SEC teams (arguably the worst). Both of these games were at home!

That’s not how a top 25 team performs.