Former New York Giants wide receiver Victor Cruz, officially announced on August 21, 2018, in a video on the UNINTERRUPTED’s YouTube channel that he is retiring from football. Cruz also said that he will join ESPN as an NFL analyst next season.

“As I officially close one chapter of my life and begin another, I could not be more thrilled to join another championship team at ESPN”, said Cruz on the UNINTERRUPTED.

Victor Cruz’s tenure with the Giants.

Cruz began his NFL career as an undrafted free agent in 2010 who exploded for three touchdowns during a Giants vs Jets preseason game. That explosion led to his getting more opportunity, and he eventually made the Giants’ roster and quickly became one of their best offensive weapons. In the 2011 season, Cruz caught 82 passes for 1,536 yards and nine touchdowns. He also had a strong playoff with 21 receptions for 269 yards in four games and a touchdown catch in the Giants’ 21-17 victory over the Patriots in Super Bowl XLVI. He followed that up by catching 86 passes for 1,092 yards and 10 touchdowns the year after. But then injuries began to take their toll.

Cruz’s play slipped a bit during his third year with the Giants, and then he suffered a devastating knee injury in the 2014 season that caused him to miss 10 games of that year, as well as all of the 2015 season. He returned to the Giants in 2016 but it was clear that he was not the same player. He had just 39 catches for 586 yards and a touchdown in 2016. After the 2016 season, the Giants cut him loose. Cruz signed with the Chicago Bears last offseason, but he was released on the final cutdown day

Cruz retires with 303 career catches for 4,549 yards and 25 touchdowns. He goes down as a success story for an undrafted player, and one who when at his peak was among the most exciting players in the NFL. 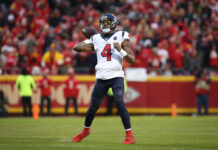 Is Jaylen Brown The Celtics’ Best Player In The Bubble?

Is Jaylen Brown The Celtics’ Best Player In The Bubble?