The memorial tournament, played the week after Memorial Day instead of the weekend of, is the next in line for the top PGA players to show off their skills. One of only five invitational tournaments in the year. As always there are focal points that are ripe for discussion so let’s go over them.

Played at the wonderful Muirfield Village Golf Club, in Dublin, Ohio, the memorial tournament is hosted and the course designed by golf great Jack Nicklaus. A bold and difficult course for when it was designed and made in 1976. It has withstood the test of time and given some of the best finishes with tight competition over the years. For golfers new and old, playing on this course is special in so many ways. The love and respect Nicklaus has is something that has crossed generations of golfers. And his passion for the game has certainly never dwindled over the years so this tournament is special.

PLAYERS ON A ROLL

So far this year we have seen some amazingly play, finishes and simple incredible skill. Drives of over 300 yards are becoming more and more common. Some of these drives may hook or slice, but in many cases that is simply giving these players a chance to show their recovery skill. Last week in Texas, Justin Rose was able to hold off all comers and win his ninth tournament.

This week he will be one of the most watched players. Especially since he is paired with Tiger Woods and Jason Dufner. With Justin’s win last week and Tiger and Jason’s history at the memorial, any of the three of them can hoist the trophy on Sunday.

WHEN WILL TIGER POUNCE?

It is PGA golf, it is an inescapable topic, and truly most fans have no wish to avoid it. When will Tiger fully pounce at one of these tournaments? He is playing very well, he has come close, and finished tied for second in the Valspar championship. However he missed the cut in the Genesis Open, so consistency needs to be the key. Some tournaments he is driving well with great recovery shots but his putting is off. Others his driving is off but he sinks amazing putts. We are all waiting for the course that he gets everything on-line at once, and then we will see the Tiger of old and see everyone else hurrying to catch up.

MOTHER NATURE IS ALWAYS A FACTOR

This weekend, the first two days have a chance of thunderstorms. Besides what water does to the course and speed of the greens. A strong, close thunderstorm can delay the tournament. Pushing some golfers to finish their round the next day and then start the next. In the warm to hot weather that is expected, fatigue is a real factor to the skill of these players and always is something to keep in mind.

This has so far been a great year of golf and there is no reason that it shouldn’t continue. This week’s celebration at the start of the tournament adds sentimentality to skill in playing. Fans and players alike will have much to enjoy this weekend. However, always remember. Golf is hard, and golf is evil, some of the best drives on the course end with double bogeys from difficult hard to read greens. As easy as some of these guys make it look, it just isn’t. Enjoy. 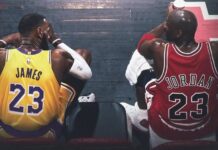 Apples and Oranges: The 7 Best Sports Debates That No One Can Win 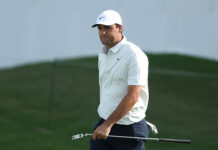 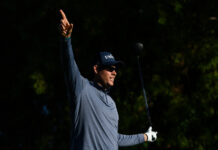