Offensive Tackles are some of the most underrated players in all of football. Given the responsibility to protect the quarterback and to set up running lanes, the offensive line is the bones and the structure of the offense. Every play is developed behind these big guys up front. Think about some of the greatest quarterbacks in the game, Peyton Manning, Joe Montana, Tom Brady. These are all players who were sacked less then twenty times a season. Thanks to players like Nate Solder, Jeff Saturday, and other Hall of Fame linemen, these guys had a chance to make the throw down the field.

This year, the class has some good potential but isn’t a particularly deep class. So without further ado, the top five offensive tackles entering the 2018 NFL Draft!

Big player with good quickness off the line. Was a junior college transfer to Mississippi State and played two full seasons as a starter in the SEC. Does a good job handling mixed blitzes and picking up his assignment. Needs to use his hands better, sometimes ends up giving up too much ground from trying to “wind” his arms into place.

Looks almost like Andre the Giant on the field in the PAC-12 games he played in. Hulking size, and very aggressive. Blocks well on run plays and has the quickness to pull. Not a strong pass protector, seems to give up a lot of ground. Might do very well as a right tackle in the league.

While a lot of people seem to think McGlinchey is the next stud in the NFL, I am still questioning his ability. Has incredible size (6’7″ 320 lbs) but seems almost too big to be truly effective. Very defensive player, doesn’t like to attack and doesn’t show the strength you want to see from a guy his size. Struggled terribly against NFL caliber defensive ends. Has quick feet and quick hands, and could develop into an all pro. Needs some coaching before throwing him into the mix.

I know that his combine performance was dismal at best, but as great and useful as the NFL combine is, football is not played with shorts and a t-shirt on. Brown’s tape is extraordinary. Uses his size extremely well to bully bigger defensive linemen. Has by far the best strength in the draft. May struggle early in his career dealing with stronger players, but Brown will enter the league as one of the strongest men, and will learn how to better set his technique.

My favorite lineman in this draft. Connor Williams shows so much potential in the league because of his combination of quickness, strength and speed. His recovery is the best in his class. His finishes blocks and keeps people off of the line, and drives on run plays. There aren’t many negatives there to look at. Had a knee injury this year that forced him to miss a lot of time, and may be a concern in the future. If he can stay healthy, he is the best linemen in this draft undisputedly. 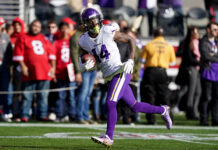