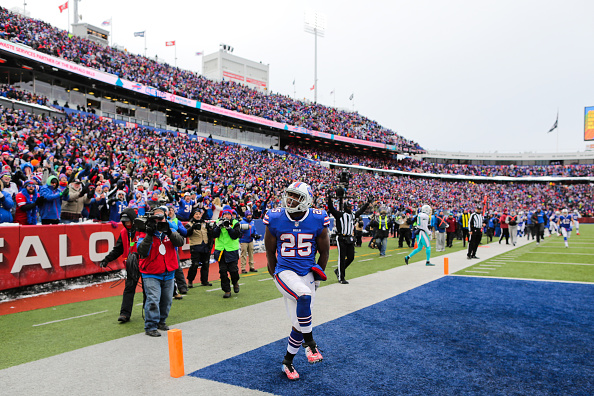 Every season, there are games that you circle on the schedule. You anticipate them and you can’t wait to see the matchup of the season. There a variety of reasons as to why fans look forward to particular games. Division rivalry, bad blood, playoff defeat, etc. One thing that is for certain is a win is a must and a loss can ruin an entire week. This season the Bills have a schedule full of games that have the potential to be this type of game. While every week is a big deal in Buffalo, these are 5 games to look forward to in 2018.

5 Buffalo Bills Games to Look Forward to in 2018

This season the Bills will take on the Houston Texans in Houston. This game is significant because it will be the first time the Bills face Deshaun Watson. Watson was the 12th selection in the 2017 NFL draft. The Bills originally had the 10th pick in the draft before trading it to the Chiefs. The Bills could have selected Watson at 10 and had their quarterback of the future but passed on him instead. They rolled with Tyrod Taylor. While they made the playoffs, they didn’t escape the wildcard after a very poor showing from the offense.

It is safe to say that Watson could have brought a major upgrade to the passing game this season. In only 7 games this year Watson threw for 19 touchdowns. Taylor in 15 games only threw 14 touchdowns. Also, Taylor has never thrown more than 20 touchdowns in a single season of at least 14 games played. Watson would have had at least that many in 8 games played. While the Bills did get Tre White in the 2017 draft who led all rookies in Pro Football Focus’ rookie grades at the end of the season, there is no denying that Watson could have been a great addition to the Bills roster. Beating Watson would be a sigh of relief for Bills fans who still look back on this and wonder what if.

It is safe to say that the Bills and Dolphins aren’t fans of each other. A division rivalry that is acknowledged by both sides has heated up recently. These two teams most recently faced in week 17 of last season. In that game, towards the end of the game, a massive brawl broke out. This saw the ejections of Dolphins receiver Jarvis Landry and running back Kenyan Drake. Drake threw his helmet at one point in this altercation which drew a fine from the league.

Also, in 2016, Jarvis Landry hit Bills Saftey Aaron Williams in the head which would end Williams’ career. This further strengthened the bad blood these teams have for each other. With that week 17 brawl being the last game the Dolphins have played. They will remember it next time they play the Bills. Bills fans will also remember and won’t hesitate to remind the dolphins when they come to town in 2018.

This is where it starts to get personal for Bills fans. Any fan that has started watching since Tom Brady has entered the league has to deal with one fact. Tom Brady has more Super Bowl Victories than losses to the Bills. This may not be as bad for other teams that don’t face Brady often. However, the Bills have faced Brady 30 times in his career beating him a mere 3 times.

The disdain Bills fans have for Brady is possibly the greatest in the league. When one person terrorizes your favorite team for a decade, there will be some hatred for that person. While every Bills vs Patriots game is a big deal this season’s matchup in Orchard Park, NY will be a little bigger. Now that the Bills are true threats to the New England dynasty the gamne should be an exciting one to watch. Especially combined with the Bills fans providing the energy all game long.

This game is going to be very fun to watch if you love defense. The Ravens and Bills both have very solid secondaries led by players such as Jimmy Smith, Mrlon Humphrey, and Eric Weddle. The Bills are led by Tre White, Jordan Poyer, and Micah Hyde. Thery also have very solid players in the front seven. The Ravens have C.J Mosley and Terrell Suggs while the Bills have Preston Brown and Kyle Williams.

The biggest reason for this game being on the list is how the 2017 playoff picture turned out. Going into week 17 the Bills and Ravens were battling for the last spot in the playoffs. The Ravens had control of the spot and the Bills needed to win and hope for a Bengals win over the Ravens. The Bills got the job done against Miami and Cincinati did as well.

While the Bills didn’t directly eliminate Baltimore from the postseason they are the team that took their spot and Ravens fans will remember. The atmosphere will be cool to see when these two teams face off in 2018.

Another game fuled by implications from the 2017-18 playoffs. The Bills made the playoffs for the first time since the 1999-00 season. It was quickly ended in the wildcard by the Jacksonville Jaguars. Bills fans weren’t just happy to be there. They whole heartedly wanted to make a run for the Super Bowl and they won’t be forgiving Jacksonville anytime soon.

Bills fans will give Bortles and company a warm Western New York welcome when they come to New Era Field. Another crazy atmosphere and possibly another trip to the playoffs on the line will amount to an amazing game. We know Bortles will be back with Jacksonville, but who he will face off against is still a question that needs to be answered. Bills vs Jaguars is going to be possibly the most entertaining game of the Bills season and Bills fans can’t wait to see if the quarterback they roll with can do what couldn’t be done a few months prior.