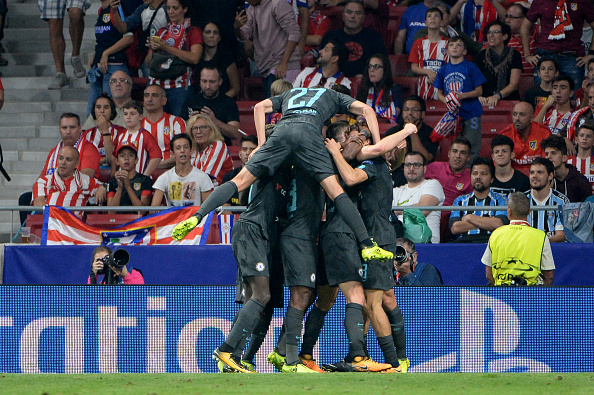 We’re only a third of the way through the group stages in the Champions League, and it’s already clear that a couple of English teams are closing in on qualification.

Jose Mourinho’s side have probably the easiest group of all the English clubs, so there excellent start doesn’t come as a surprise. Two victories, both by three goal margins, have seen United top the table, with just one really tough game to come away at Benfica. It seems inevitable that barring an incredible collapse, the Red Devils will top the group, and potentially early enough to begin to rest some players for the Premier League. Romelu Lukaku already has three goals under his belt in the competition, and he is well on his way to leading United to the top of the Group A table.

Chelsea have probably pulled off the result of the season so far in winning away at Atletico Madrid in matchday two. Antonio Conte’s men have already played, and won, their hardest game of the group, and are well on their way to qualifying for the next round. The Blues put in a superb performance at the Wanda Metropolitano, and were deserved winners, with a dominant performance that has barely been produced by the away side at Atletico in recent years. Stories of Chelsea’s demise at the start of the season seem to be greatly exaggerated, and if anything, they seem to be just as strong this year as they were last year. They are in a superb position to top the group, even with two fixtures with Roma to come.

There’s no hiding it, it’s been a disappointing start to Liverpool’s European campaign. While every other Premier League team have won their opening two Champions League games, the Reds have picked up just two draws. They blew a 2-1 lead to be pulled back to a draw at home with Sevilla, and were then held to a 1-1 draw, down in part to a shocking error from Loris Karius. It is clear that Liverpool do have a problem at the back, but in the draw with Spartak Moscow they were toothless in attack after the break, and struggled to take chances. Yet Liverpool are still second in the group, and only two points off the top. They should still qualify, but as of yet, they haven’t shown anything the rest of Europe will be afraid of.

It’s all seemed a little too easy for Pep Guardiola’s men in Europe in their opening two games. A 4-0 triumph away in Feyenoord followed by a 2-0 win over Shakhtar Donetsk have left City three points clear at the top of the group. They still have potentially their toughest two games to come against free-scoring Napoli, but they would be very disappointed if they didn’t qualify as group winners from this position. It is clear that Guardiola will be hoping for success in the competition, given it was the one trophy that escaped him during his time at Bayern Munich. They don’t look like they’ll have any problems going forward, but much like Liverpool, they will be worried about the defence.

Tottenham undoubtedly have the toughest groups of all the English teams with Real Madrid and Borussia Dortmund. But so far, it’s been a successful campaign for Spurs, who picked up an impressive three points against Dortmund at Wembley, before an away victory at APOEL Nicosia, who look like being the group whipping boys. Nothing’s clear yet though, with Tottenham still facing two games against Real Madrid and a trip to Dortmund. You get the feeling that they’d need to get a result in at least one of those three games if they are to progress. However, if they are able to play like they did against Dortmund in the opening game of the group, they should be able to get enough points to finish in the top two and progress to the last 16.