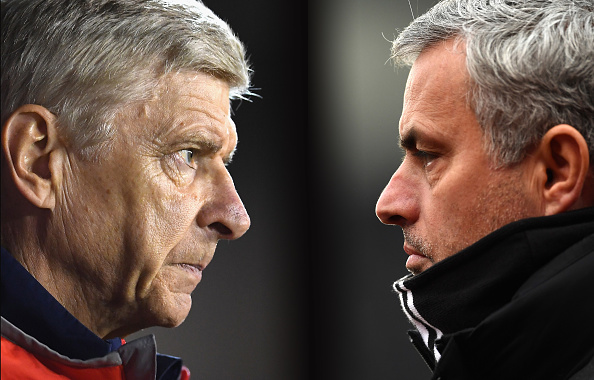 Sunday’s clash at the Emirates is crucial for Arsenal and Manchester United as they continue their push for the top four. It may also be Arsene Wenger’s last time on the sideline for one of the great Premier League rivalries. Here’s a look back at five unforgettable meetings in the Arsenal manager’s tenure.

Manchester United were chasing three trophies when the sides met in the last ever FA Cup semi-final replay. After trading long range goals, the Gunners looked the more likely to advance after United captain Roy Keane’s second-half red card. Dennis Bergkamp squandered a chance to win it when Peter Schmeichel saved his stoppage time penalty. Ryan Giggs won the tie with one of the great FA Cup goals, dribbling out of his own half and through the entire Arsenal back line to finish high into the net. His subsequent shirt-waving celebration is now as famous as the goal itself. United went on to win the treble, also topping Arsenal by a point in the league.

Arsenal, the FA Cup already under their belts, traveled to Old Trafford looking to do the double for the year. Undefeated away from home, the visitors needed only a point to secure the league title. Though both sides went into the meeting at less than full strength, the Gunners managed the match’s only goal through Sylvain Wiltord. The loss ended United’s three-year reign atop the league, and the sight of their rivals celebrating on their home field remained long in the memory.

The Battle of Old Trafford. One of the many ill-tempered matches that defined this era of the rivalry, featuring eight yellow cards and a red. The drama peaked in the 91st minute. United’s Ruud van Nistelrooy hit the crossbar from the penalty spot, leading Arsenal defender Martin Keown to shout mockingly in the Dutchman’s face. After the final whistle, further confrontations led to several bans and fines. Arsenal finished the year undefeated and league champions.

The only FA Cup final meeting between Arsene Wenger and Sir Alex Ferguson. United, dominant throughout, missed several clear chances and twice hit the woodwork. Despite a late red card for Jose Antonio Reyes, Arsenal held on to force the first ever final shootout. A miss from Paul Scholes allowed Patrick Vieira to net the decisive kick. Arsenal won their tenth FA Cup and denied United their second in a row.

Eclipsing United’s 6-1 win a decade before, the six-goal margin is the biggest in the rivalry to date, as well as Arsenal’s worst since 1896. Manchester United overran an Arsenal side depleted by injuries, suspensions, and summer departures. Wayne Rooney netted a hat trick and Ashley Young a brace on a day that also saw goals from Danny Welbeck, Nani, and Park Ji-sung.  “I’d 8-2 be an Arsenal fan” went the post-match joke.