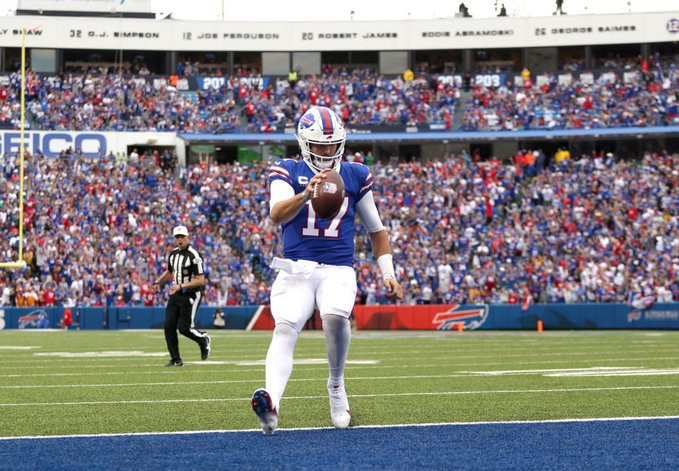 Spread betting may be a foreign concept to some, but to others, it adds that little bit of juice to the game you were already going to watch. Whether you’re a casual fan who likes to wager the big games of the week, or a professional who analyzes the lines as they arrive, to quote a Jay-Z & Kanye song, “I got what you need”.

This season, I am going to give you five games ala Colin Cowherd’s “Blazin’ 5” in a series entitled “Steakspeare’s Spreads.” Here are the five best spreads of the week. Bettor beware, you may need a larger wallet…

The opening game has the defending Super Bowl champions as home underdogs and I love it. Forget the fact that there will be opening week pomp and circumstance in the city of LA, you’re also coming off your first Super Bowl win since returning to the city and the celebration will be overwhelming.

I believe this breeds a letdown for the Rams. It is also no small task to defeat the Super Bowl favorite in your first week. -2.5 means all they have to do is win by a field goal or more. With as high-powered of an offense as they have, this should be an easily attainable feat. Look for the Bills to score early and often in this game as the Rams are understandably distracted in week one.

This game felt like a trap bet for overeager Ravens fans. To start, the Jets had a great offseason and finally seem all in on young quarterback Zach Wilson. They’ve provided him with upgraded weapons to truly see if he is their franchise guy. To open up as 6.5-point underdogs at home feels like the Ravens are more overrated than the Jets are bad.

Now, I will say it wouldn’t shock me if the Ravens won this game, but they were decimated with injury last year so they didn’t all play together for extended periods of time. Factor that rust in with general week one rust and I just can’t see them winning by a touchdown. Look for this game to be closer than you think and make sure you’re on the right side.

Sometimes in sports, there are just certain things that consistently happen that we can’t quite quantify. The Patriots always seem to split the Miami games, usually losing in Miami. The Dolphins are favored by less than a field goal here, but with the new look offense, I’m expecting Miami to win this pretty handily.

New England has been the subject of some bad press on the coaching side and has not yet officially named a play caller. They have also elected not to officially have coordinators. Maybe Belichick is ahead of the curve yet again, but until that’s proven, I’m siding with conventional wisdom and taking the new-look Dolphins in a blowout.

This may have been a surprising line to see, but the Panthers improved at quarterback, will have a healthy CMC, and return their top receivers all while not having any major losses outside of stud edge-rusher Haason Reddick. Oh, and by the way, Baker Mayfield, the king of revenge, will be playing against the team that he led back to relevance.

I feel like -2.5 is a fair line here because the Browns, outside of quarterback, seem to overmatch Carolina, but there’s just something about Mayfield in these types of situations that I wouldn’t bet against. This is also the Panthers home opener, so the crowd will be into it. Cleveland is still Cleveland, so expect them to come back down to Earth this year after a tumultuous offseason.

Broncos country, Let’s Ride. Like him or not, Russell Wilson is a star in this league. He isn’t exactly trying to hide it anymore either, but he has reached this platform because he is a gamer. It’s not often that a Hall-of-fame quarterback is traded. It’s even less often he debuts against his former team on primetime television.

Wilson is no stranger to the lights and the Seahawks are clearly in a rebuild. In their first game of the post-Wilson era, they’re starting a backup caliber quarterback while also without running back Chris Carson who retired this offseason. This game could get ugly quick, especially if you’re a Seahawks fan. Broncos will cover and then some because Russell Wilson has something to prove to Seattle for the first time in a long time.

Four favorites and an underdog are on the slate this week. I’ll track the results for accountability…or for bragging rights 😉 .