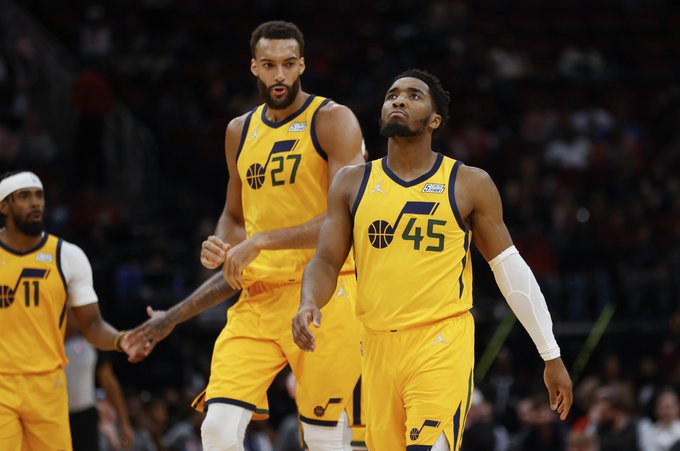 With the Utah Jazz headed back to the drawing board, I came up with four electrifying Rudy Gobert trade destinations.
0
Do you see Gobert getting traded this off-season?x

Before I dive in, I want it on record that I think Gobert may be the most underrated player in the league. Outside of Gobert, the Jazz have no plus defenders, and he still managed to drag this unit to 10th overall according to NBA.com’s Defensive Rating (DEFRTG).

Since Rudy Gobert became the full-time starting center in 2015-16, the Utah Jazz have finished 7th, 3rd, 1st, 2nd, 13th, 3rd, and 10th overall in Defensive Rating. In every trade I throw out there today, Gobert is the best player in it, and it’s not even close. So, when you see your team on there and wonder why they would give up so much, that’s why. He can single-handedly fix your team’s defense. Very few players in the league have the ability to do that. Definitely not anyone available.

If Rudy Gobert is So Good, Why Would the Utah Jazz Trade Him?

The Jazz are stuck. They have two great players in Donovan Mitchell and Gobert, but the rest of the roster leaves a lot to be desired. Their young players aren’t very good, and their good players are old. They claim the second-oldest roster in the league. It’s not an envious position to be in.

Rudy Gobert plans to demand the Jazz trade either him or Donovan Mitchell in the next few days, per @realOCsports 👀 pic.twitter.com/kfXzaJd9Vc

With rumors of Mitchell and the disgruntled French big man having a fallout, a trade may be the only way to fix this roster. With Mitchell being the younger player, it makes more sense to trade Gobert and build around Spida as you can wait for draft picks to develop, if necessary.

Rudy Gobert Gets Traded to the Nets for Ben Simmons

I love this trade. The Jazz have a wealth of shooting (2nd in 3 Pointers Made, EFG%, and TS%), while the Brooklyn Nets didn’t have any defensive rebounding (30th in DREB%) or much defense at all (20th in DEFRTG). The Nets get a much-needed boost on defense, and the Jazz get a running mate for Mitchell, who happens to be one of the top wing defenders in the league, if not the best.

If he ever picks up a basketball again, Ben Simmons would finally get a chance to play WIDE OPEN. No Joel Embiid, Al Horford, or Tobias Harris clogging the lane. Simmons running the fast break while flanked by all shooters is basketball at its best.

Think back before Ben blew that layup; close your eyes, and envision Simmons moving down the court like a freight train, whipping no-look passes, grabbing alley-oops, throwing alley-oops, doing all the super-charged Magic Johnson things we imagined before he got thrown into that crowded Philadelphia 76ers offense. Basketball nirvana.

In saying all that, the Jazz would still be worse without Gobert. Simmons has shown time and time again he doesn’t want to play center like Draymond Green. He wants to play point guard on offense and defend one through four on defense. Utah would still need a center, and floor spacing centers that aren’t turnstiles are in short supply.

The Nets would have to throw in extra pieces, a penalty regarding Simmons’ uncertainty. Other than that, they should be ecstatic. They have plenty of ball-handling, assuming Kyrie Irving comes back, and their defense immediately rockets into the top 15, if not top 10. Suddenly getting swept by the Boston Celtics is in the rearview mirror, and Kevin Durant and the Nets are championship contenders again.

Dallas Mavericks Swing for the Fences

I’m not sure the Dallas Mavericks have much that the Jazz would want. Trading away Tim Hardaway, Jr. and Dwight Powell would be enough to match salaries, but why would Utah do that? Would the Mavs be willing to throw in Josh Green and/or some draft picks?

The only way the Jazz make a trade with Dallas is if they’re willing to take a small step back for a year or two and build through player development. I don’t think that’s a terrible idea; Mitchell is only 26, and Powell would come off the books after next season. Suddenly in 2023, the Jazz would have a bit of cap space and room for a max in 2024 with Mike Conley coming off the books. Now Mitchell is 28, and you can pair him with a superstar, plus whatever prospects you’ve developed.

I’m a big fan of Gobert on the Mavericks. As Chris Paul did with DeAndre Jordan, Luka Doncic can bring out his best on offense. The Mavericks already had a top-10 defense under Jason Kidd; Gobert cleaning up everything near the hoop would only add to the Mavs’ aggressive, trapping style. He’s the world’s most incredible safety net.

If anyone in the league knows how valuable a center is to a championship team, it’s Mark Cuban who reaped the benefits of adding Tyson Chandler before the 2010-11 season and brought home an NBA title.

Wizards and Jazz Shake Up Their Rosters

I bet the Utah Jazz would love to get rid of Conley without giving up draft picks. Unfortunately, they’re in a pickle due to his age and large contract. Enter the Washington Wizards. They have all sorts of pieces and no idea what they’re doing (which is how they exist in perpetuity). I give to you Gobert and Conley for Kristaps Porzingis, Kentavious Caldwell-Pope, and Kyle Kuzma.

Washinton’s only goal at this point should be keeping Bradley Beal on the Wizards. Against all odds, Beal truly appears like he wants to stay in Washington, but how many losing seasons and spinning of the wheels can one man take? Judging by the way the league is going, it’s not long.

The Wizards had one of the worst defenses in the league (25th in DEFRTG); as I’ve stated ad nauseum already, Gobert will fix that. He can clean up Beal’s mess the same way he cleaned up Mitchell’s. Beal plus Gobert and Conley get the Wizards into the playoffs.

The Jazz have to figure out if trading for Kristap’s contract is better than having Conley’s contract. Both expire in 2024, however, both players are always injured. The upside is that Porzingis is younger, can play center, and spread the floor for Mitchell. They’d also add two good wing defenders, so their new center doesn’t have to handle Gobert’s workload. This would also make some of Utah’s current wing players expendable if they have trade value.

The Wizards become Jazz east, and the Jazz become something different altogether.

Rudy Gobert for Julius Randle, Alec Burks, and Cam Reddish. This is the only trade where both teams lose, but isn’t it always that way for the New York Knicks? There are rumors that the Knicks have been clamoring for Gobert, so I tried to put something together.

The Knicks would suddenly have one of the league’s best defenses, but no one who could reliably get them a bucket. The Jazz now have two dynamic, three-level scorers in Mitchell and Randle, but only Reddish would be good on defense. The good news for the Knicks is there wouldn’t be anyone stoppin’ Obi Toppin from getting playing time with Randle out. Maybe the Knicks would be better on offense for the sole fact that they don’t have to watch Randle hijack every possession.

I don’t think the Jazz make a trade with the Knicks without heavy draft compensation, but New York shouldn’t be giving up draft picks at this point of their building process. It is clear the 2020-21 season was a fluke, and they should go back to the drawing board. They have promising young pieces and shouldn’t be throwing them away to rush back into the playoffs.

The Indiana Pacers could match salaries by sending out Myles Turner and Malcolm Brogdon for Rudy Gobert. The Pacers don’t like to tank, so I could see them doing this even if they had to send out some picks. Brogdon would be good next to Mitchell if he could stay healthy.

Domantas Sabonis and Harrison Barnes are enough to match the salaries, but how serious are the Sacramento Kings about making the playoffs? Yes, Gobert improves their terrible defense, but they’d also have to package a bunch of picks to land Gobert. Like the Knicks, the Kings have to breathe and take their time with this, although I don’t expect this kind of patience from them.

A team like the Memphis Grizzlies, who are knocking on the door of championship contention, would love to add a player of Gobert’s caliber. Would they be able to center a package around Steven Adams and some of their depth pieces to land the Stifle Tower?

The Charlotte Hornets have a bunch of salaries they could mix and match for Gobert. Like the Pacers, Kings, and Wizards, their defense is putrid, and adding Gobert would go a long way towards them not getting plastered in the play-in tournament. I think of all the teams on the list; they would see the most significant jump in wins by adding Gobert as long as they’re not giving up LaMelo Ball or Miles Bridges.

How Likely is a Rudy Gobert Trade?

The Utah Jazz could also hang on to Gobert and continue running it back with him and Mitchell. The only problem with this is I don’t see how they can improve on the wing. Another option could be cleaning out their draft picks along with Conley’s contract and trying to get a solid wing piece that way. I’m not sure they could create a “big three”, but maybe they could land Jonathan Isaac or someone similar.

It will be an exciting offseason with Gobert and Deandre Ayton both potentially on the move.