Saturday was a unique day for SEC College Basketball. #9 Kentucky suffered their second loss of the season at the Seton Hall Pirates with an 84-83 overtime score. With the Wildcats losing, this opened the door for an underdog to create some more upsets against SEC powerhouses. Even though the Dayton Flyers came to play against the #8 Auburn Tigers, the Tigers controlled the game from start to finish. The Tigers established a dominant 19-point lead to end the 1st half followed by a mild 2nd half outing to beat the Flyers.

Guard Bryce Brown leads his Tigers to a fast start

It is still a huge surprise that Bryce Brown decided to return to his senior at Auburn. The senior guard dominated the Flyers through his smart decision that was established by his superior athleticism and his intensity. In the 1st half, Brown scored 22 points on 6-out-of-7 field goals, knocking down four 3-point shots out of five shots, and 6-out-of-7 free throws. Brown made four straight threes in the final four minutes of the 1st half that energized the home Tigers crowd. One of the biggest objectives for Brown in this game for himself was to make better shot selections. Brown took the smart, necessary shots to give the Tigers a wide lead. He also created a good amount of emotional presence by setting up opportunities for his teammates to score.

The chemistry of the Tigers players created a set of fast setups and quick scoring, mostly through alley-oops. Auburn outperformed the Dayton Flyers in assists with an 11-to-7 margin. Point guard Jared Harper had a big impact in setting the play selection as well as scoring efficiently. Harper accounted for 14 points by shooting 3-for-5 from field goals, shot 2-3 from the 3-point arc, and three assists. Guard Horace Spencer created great shot selections by accounting for five assists in the 1st half. The intensity was also present on defense when the Tigers were matching the energy and will of the Flyers. Center Austin Wiley had three blocks in the 1st half as he put the hammer down on any scoring opportunities for Dayton. Overall, the Tigers outscored the Flyers 52-32 in the 1st half.

Tigers showed slight weakness in the 2nd half

In the 1st half, Auburn looked like one of the most dominant and complete teams in all of College Basketball. In the 2nd half, the Tigers were less efficient when they completely slowed down. The Tigers showed a lack of tempo in the 2nd half compared to what they did in the previous half. In the 1st half, Auburn shot the ball at a 61.5 field-goal percentage and 53.8 percent from behind the 3-point arc.

In the 2nd half, Auburn shot an underwhelming field goal percentage of 34.3, and 25 percent from behind the 3-point-arc. After the game, coach Pearl said, “I thought we didn’t value the possessions in the second half quite like we needed to, but we’re a work in progress.” Bryce Brown accounted for 12 points on a 4-for-11 on field goals. There were times when Brown, Harper, and the Tigers offense took rushed or unnecessary shots.

Center Austin Wiley finished the night with five total blocks as he was a juggernaut defensively in the paint. Coach Pearl took this measure to address that the nine total blocks from his Tigers were from a lack of solid support of preventing the Flyers from driving to the net. Defensively, Auburn was solid by accounting for 9 blocks, 10 steals, and 23 turnovers including 16 from the 1st half. Nine games into this College Basketball season and the Tigers still have issues to fix in their tempo and consistency. There was not much offensive production from Tigers bench outside Wiley’s four points in the 2nd half. His points were the only points from the bench in the 2nd half.

Auburn prepares for their next task against UAB

The #8 Auburn Tigers (8-1), despite their self-expressed flaws, are making their case as a top college basketball program. Before Saturday’s matchup, the Tigers are tied for 17th in the nation in points per game (86.4). Head coach Bruce Pearl is looking to continue his aggressive style of offensive consistency and defensive efficiency. Brown will continue his fantastic Auburn career after accounting for 34 total points (a career high) against Dayton Flyers. Brown is looking to become a high pick in the 2019 NBA Draft. He is also looking to become the first player Auburn Tiger to be drafted since Jamison Brewer in 2001. Brown’s next big objective is to have his Auburn Tigers repeat as SEC Champions. Auburn will look to become more of an elite team next Saturday against the UAB Blazers (6-3). 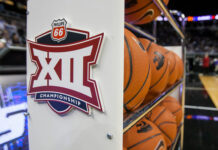 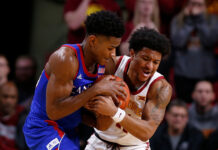 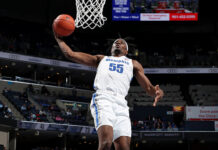