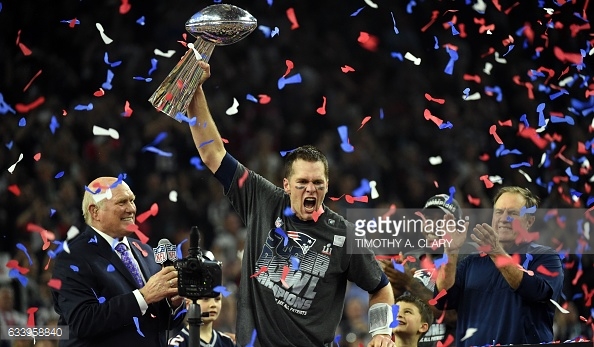 The NFL has seen its fare share of great teams, but who is the best? Here are the top 5 dynasties in the NFL’s history.

Troy Aikman, Emmitt Smith, and Michael Irving are some names we think of when we think of the Dallas Cowboys in the 90’s. From 1991 to 1996, ‘America’s Team’ made the playoffs all six seasons. They made and won the Super Bowl 3 times in that span, including the back to back Super Bowl wins in the 1992 and 1993 seasons. Dallas had a stacked roster on both defense and offense. In 1993, the Cowboys sent an NFL record breaking 11 players to the Pro Bowl. In 1995, Jerry Jones lured cornerback and kick return specialist, Deion Sanders from the 49ers adding even more talent to the already star studded roster.

Before Brady and Belichick, there was Bradshaw and Noll. From ’72 to ’79, the Steelers made the playoffs eight times, which included reaching and winning the Super Bowl four times. It was amazing to see this streak of brilliance, especially after the 1969 Steelers team went 1-13. They became even better when Chuck Noll selected Terry Bradshaw and Mel Blount in the rookie draft. Year by year, they improved, with Terry Bradshaw as QB, and Chuck Noll as the coach, until they became a dynasty to be marked down in the history books.

Vince Lombardi, arguably the greatest coach of all time, was at the head of the realm of the Green Bay Packers during this era of success. After losing the NFL Championship game in 1960, Lombardi promised the team they would never lose another title game, and they never did. In the six seasons following the 1960 season, they won the Super Bowl all six times! They were unstoppable, and nobody was better than they were at the time. Their offense was led by players such as QB Bart Starr, RB Jim Taylor, and WR Carroll Dale. Players such as DE Willie Davis, DT Henry Jordan, and LB Ray Nitschke led the defense. The Super Bowl trophy was later named after the coach of the team during their remarkable strive for success, the Vince Lombardi Trophy.

Now, every year in the beginning of February, we are reminded of this teams success, as two teams compete in the Super Bowl for the Vince Lombardi trophy. After the 1967 season, Lombardi stepped down. From 1968 to 1991, the team had little success.

*The NFL Championship was renamed to the Super Bowl when the American Football League merged with the National football league in 1967.

In 14 years, the 49ers advanced to the playoffs 12 times, including five visits and five Super Bowl victories. Within the 14 years, the team relied on two quarterbacks: Joe Montana and Steve Young. Within this time period, they always won at least ten games in the season, which rarely happens, and is an incredible feat. There were better teams than this, but no team was able to make the success last as long as the 49ers did.

Two people are to be rewarded for the success of the New England Patriots: Tom Brady And Bill Belichick. Since 2001, they have reached the playoffs 14 times, the Super Bowl seven times, and won the Super Bowl five times. Besides one season, they have won at least 10 games in each season. One more Super Bowl win for the Patriots will surpass the Steelers record for most Super Bowl championships. The scary thing of this is that the dynasty is not over. The Patriots are the most recent Super Bowl winner, and so far this off season, they have acquired very talented players to add to their victorious roster. This will be a team to continue to watch, and will be a threat to every team in the NFL for the next few seasons, at least.